A small but very select group visited the St Helens’ Chapel dig at Malham. This visit was in lieu of a the reciprocal visit by Ingleton Archeology Group. Dr David Johnson, dig leader, outlined the main finds so far.  The nave pit exposed a north west buttress which was probably a later addition to the chapel.  Another rather large trench exposed a stone bank with three huge boulders.   As per usual the dig probably raised more questions than it answered.  Not all turned out to be as the geophys promised.  Many small finds included and were assumed to be, hand made metal nails and various pieces of pottery, glass, lead and at least two small flints .

Using Arthur Raistrick as a guide we then ascended up to Stridebutt Edge a high limestone terrace to find a most interesting complete Iron Age settlement with several enclosures and hutments.  We were also able to pick out a trench type walled passage 2-3′ in width and perhaps 20′ long and a double banked circle approximately 60′ diameter.   Our position was also useful to spot the Iron Age lynchets and Mediaeval field systems.

The  good weather enabled us  to see far down Malhamdale towards a well known Lancashire hill. Of course Iron Age man may have had a different name for Pendle Hill. 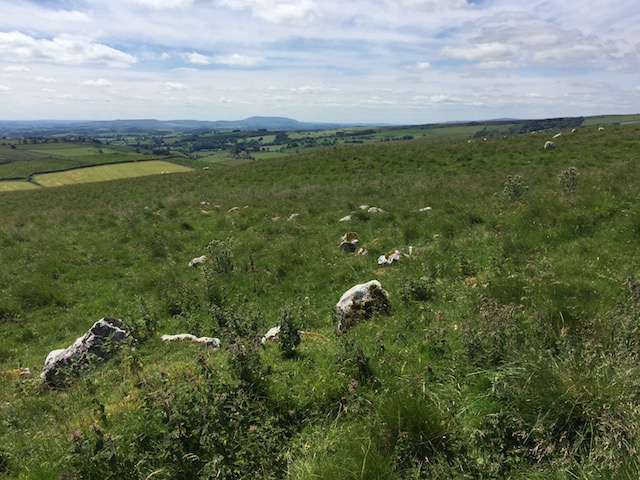 On returning to the road we progressed upwards and turned left  off the road to visit the remains of a monastic sheephouse,  it was rather more difficult to identify a series of rectangular earthworks outlining a large building which may have housed up to  50 ewes with a large outside enclosure and a small building which possibly housed the shepherd and foldmen.  Possibly in use from 1290 to the Dissolution of the Monastaries.

All in all a good day with interesting finds and in addition we were able to spot the wonderful limestone flora.  This area is particularly rich in ancient history from Mesolithic, Iron and Bronze age to  Mediaeval and would bear further fruitful exploration at a later date.