Walk: The Heritage on our doorstep in Higher Barrowford

Come along and bring your friends this Saturday when Andrea Smith takes us on a tour of the area and the heritage that we walk or drive past frequently without noticing it is there.

Barrowford has been a centre for textile production since at least the 16th century when a fulling mill is recorded as being in the village. Until the late 18th century, the manufacture of woollen cloth was the primary industry, but in 1780 the fulling mill was rebuilt by Abraham Hargreaves as a cotton mill.

Of course the ford can still be clearly seen today, the origins of the ‘Barrow’ part of the name remain hazy,  without proof it can only be conjectured  that a barrow existed here.  We can however see solid evidence of the travel routes in these parts in the Toll House at the end of the bridge,this is situated on what was the Marsden to Gisburn to Long Preston turnpike.    Earlier travellers would have used the packhorse bridge in Higherford, still in use for todays pedestrians.   The Leeds and Liverpool canal close by was used to transport cotton made locally across to Liverpool and the coal that was transported was used to power the looms of Lancashire and beyond.  The textile history of Lancashire is part of most people’s family history locally, not many families would not have had a relative connected to the cotton industry.  Lancashire can hold its head high as a major powerhouse of the Industrial Revolution.

A water wheel was powered by water drawn off the weir at Pendle Water.  The mill reservoir is now an ornamental pond in the park and nearby the children’s playground the remains of the mill can still be seen.  Many handloom weavers cottages can be seen along the main road, production of  woven cotton moved from here to massive weaving sheds after the introduction of power looms in the 1820’s. 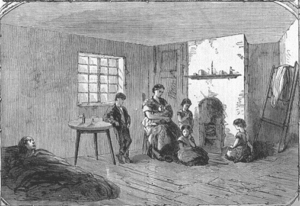 Heavy reliance on the cotton trade for employment meant that this area would have been badly affected by the cotton famine during the American Civil War.   The local history during this time will be the subject of our talk on November 9th by Steve Irwin.

Andrea will point out lots of ‘hidden’ features that are actually in plain sight so come along and join us.

You might want to enjoy a hearty lunch or a bowl of soup in the cafe before starting out.

We will meet at 2pm outside the Barn at PHC,  wear comfortable shoes and be dressed for the weather.  If there is heavy rain contact 07779506499 to check if the walk is continuing.

Parking in the Colne Rd. Car Park: Free for the first hour, then 50p per hour thereafter, pay on exit.

Banner Image:  A ‘Weavers Walk’ around Nelson. Attribution: A Hardman