A  group of friends enjoyed a guided tour of the Parish Church of St Wilfred and the village of Ribchester.

Alan and Colin ably conducted us around St Wilfreds Church, currently undergoing roof repairs and whilst we were appreciating the beauty of the church entertained us with scurrilous stories of various individuals. We then viewed  the  remains of the Roman Granary  nearby where UCLAN are carrying out another  excavation again next week in the churchyard.  On the way to Stydd various houses of historical interest, including weavers cottages and the pillars supporting the front porch at The White Bull thought to be of Roman provenance were noted.  A 19th Century villa standing on the site of an old Tithe Barn, the site of the old corn mill which became a bobbin mill, were viewed and the remains of the roman Baths standing on the what was the vicus, were explored, this building was the most substantial building outside the fort.

We then  made our way to the RC Church of St Peter and St Paul  said to be the last remaining barn church.   On the way we noted the Almshouses endowed in 1726 by John Sherbourne of Bailey,this delightful little building has a very unusual staircase. 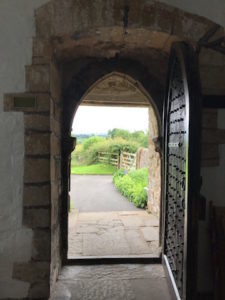 The last viewing before lunch was at St Saviours a small chapel that is  said to be a remnant of a Knights Templar place of worship. That it may be of Norman origin is conjectural, however a blocked doorway at the rear with a dog tooth arch does seem to concur with this period. Again this is a delightful building.

After a light lunch in the village hall provided by members of the committee we visited the small but very interesting Roman Museum and amongst other local artefacts saw a copy of the famous Parade Helmet.  Interestingly there was a display on Portfield Camp which will be subject of  work by the archeology team in the near future.

This was a most interesting visit, good company, good weather and everything we saw would bear further exploration there were other places that we didn’t have time to visit and will leave to explore further in the future.