The Five Corn Mills of Whalley and Billington

This was not a dry and dusty millers  tale as might be expected from the title, Brian  enlightened the audience as to some of the causes of recent flooding in Whalley and surrounding areas and the history of the local  corn mills.

A member of the wealthy and local De Lacey family, Petrus de Cestria was the first and only Rector of Whalley Abbey whose lands streched from Slaidburn to Burnley, Walton le Dale and as far as Rochdale. Inititally the corn produced by the Abbey and population was ground further down river at Chew Mill in Billington, details of other mills in the area were also outlined.      Of course the income from the mills was of great interest to the church and later the Crown as the mills enabled revenue to be raised via taxation.

The management of the water system of ditches, trenches and channels around and through the village dealing with the water of principally Wisewell Brook was begun  by the the monks in the Cistertian Abbey  and they also  built sluices to flush human and kitchen waste into the River Calder.  The system worked by gravity and altitude, which you can visualise if you stand in King St Whalley even today,  the geographical square outline of the system  might provide some explanation for present day problems.

And did you know?

That there was still an open stream in 1805 on King Street, Whalley, which was later culverted.

That the term ‘Hundreds’ which is still  seen today, referred to a piece of land which produced enough profit or food to feed a hundred soldiers. The Normans kept these areas as they proved useful for administration.

That it is highly unlikely that you will be using the same method to keep moths away from your clothes as the the monks did – they hung their vestments over the sewage trench!  Apparently the smell of ammonia keeps the moths away.

Brian revealed many more interesting and pertinent facts, especially useful to todays residents of Whalley, all in all this was a very informative evening.

One more interesting fact: The millstone on the banner heading was used in a reconstruction of an experiment conducted by Charles Darwin in his garden to measure the action of earthworms: a millstone, laid on the lawn and slowly sinking into the earth. Naturhistorisches Museum Wien. Image courtesy of Sandstein. 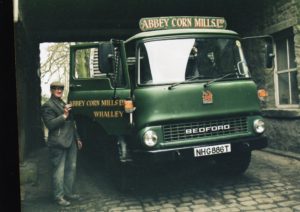