AGM and Talk: The History of the Walled Garden

The Annual General Meeting took place with reports from the Chair, Secretary and Acting Treasurer. These reports outlined the difficulties faced during the last 18 months caused by the pandemic and the shortage of volunteers to take on key roles in the running of the Friends. An appeal was made for a Treasurer and those willing to give their time to the planning and supporting of future events. If you feel you can contribute in any way please contact us at info@foph.co.uk.

The AGM was followed by a brilliant talk by John Miller. John was one of the originators of The Pendle Heritage Centre, along with Doug Barber and has had first hand involvement in its development. He gave an illustrated and very informative talk about the development of the Walled Garden and Cruck Barn. In October 1977 Sir Roger Bannister attended the opening and then the work began. 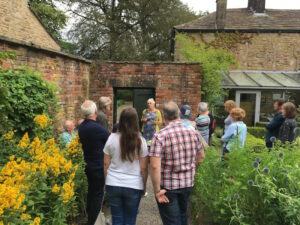 In the planning stage well known experts in the field and local historic house plans were consulted before work started in earnest, aided by 200 workers supplied by The Manpower Services Scheme during the 1980’s. During this period money was raised to commemorate the work of Dr. Chevassut and trees were bought and dedicated to his work as a long serving and much valued doctor for the people of Barrowford. The new Conservatory was added in 1990, but prior to the start of this work the Friends’ Archaeology Group carried out a dig in the foundations and Penelope Keith, who lived in Wycoller at the time, came along to give some publicity to the venture. In 2003 at the official opening of the centre, HRH The Prince of Wales paid a visit, reflecting his own interest in historic gardens. 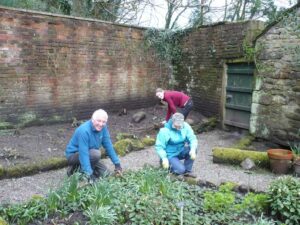 The complex as it is today is a recent achievement. It took five years to acquire the Barn and the cottages and these additions now act as venues for new income streams as the centre has to be financially self supporting. The Cruck Barn was rescued from Cliviger and reassembled in its new site at the Centre and is now used for weddings and other large events. Looking to the future John revealed plans to renew the Bluebell Wood at the back of the Centre and create “leaky damns” to help avoid flooding of the Walled Garden in future. He outlined the challenges of maintaining the garden and its now very small gardening team with the aid of small grants and volunteers.

It felt wonderful to be back at a talk where we could meet together in person again as we return to our “new normal”. Let’s hope this continues.

The next talk is on Tuesday 9th November at 2pm when Steve Irwin is giving an illustrated talk entitled, “The Lancashire Cotton Famine and The American Civil War”. We hope to see you there.

Banner Image: The Fruits of Autumn in the Walled Garden. Attribution: Sue Wilkinson.