The expression ‘give the man a medal’ has never seemed more apt. The audience at the talk on Friday evening benefitted from the vast store of knowledge and experience that Mike has garnered and developed by ‘messing about ‘ in boats and navigation canals for over 50 years. By doing so he has been heavily involved in preserving our local and national heritage and indeed northern heritage! 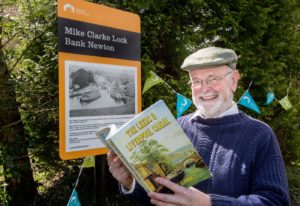 He uncovered some surprising facts, surprising that is if you knew very little about canals! Canal development happened in a much more ad hoc and complex way than might have been thought. Vital groundwork and technology preceded the efforts of the Duke of Bridgewater. Although canals were used for transporting people initially in the 1600’s in the Trekvaart system in the Netherlands., early cargoes on the very successful Aire and Calder were corn and lime. The use of lime is in itself fascinating. Lime led to improvements in mortar and thus houses were able to rise to two stories, enabling the home weaving industry to develop. The purification process involved in the production of iron ore also needed lime
Finance was provided initially by private not public money by a rising merchant class in particular by Quakers in Bradford , an instance of early ethical banking. Transportation of lime ceased as the industrial revolution took hold and the transportation of coal became a major factor in driving industrialisation. Whilst mills were situated by the canal to facilitate easy transport of goods, the water in the canal was important in the cooling of the engines.

Thus, the local landscape and working lives were closely intertwined on many levels with the Leeds and Liverpool canal. Although it took seventy five years to complete, the canal was tremendously successful in financial terms. Profit made by the canal company also enabled shares to be bought in the railways making the canals more successful as a business, this led to people being laid off work on the railway in Burnley.
Apparently their demise as an industrial transport system, was due to the decline in coal sales after WW1 this also affected the textile markets which were also partly affected by overseas trade.
Thus, we now have a system whose primary function is to aid the enjoyment of local populations in travelling on water and using the tow paths for exercise and pleasure. People like Mike make one realise how proud we can be of our local heritage and without the hard work of Mike and other volunteers our waterways might not be as salubrious as they are today in this green and pleasant land.