Marsden, Nelson and the Norse Vikings

We had a very interesting evening at the start of our 2017/18 season when Peter Marsden demonstrated his skills as an archeologist and historian (and author and speaker) to delve into his own family history and the links to his Viking heritage. 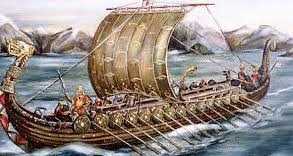 He revealed some very interesting details and links between his family of Marsdens and the town of Nelson. Many people are probably aware of the reason why Nelson became Nelson was that it was named after a local public house near the railway, The Admiral Lord Nelson. However, not all of us knew that the town was not called Marsden after the name of the existing area of Great and Little Marsden, as there was already a town of this name further over in East Yorkshire on the same railway line. Eventually Nelson – Marsden station became known simply as Nelson and the town grew up around it.

Another link to the name however, cannot be forgotten so easily.   Peter’s great great grandfather, Leonard Marsden, was one of a group of people who set up the Marsden Building Society in Nelson to facilitate local businesses which sprang up to service the growing cotton industry.   Leonard also became involved with other public spirited ventures after the  tragic death of his young wife from  polluted well water in the town centre.  Along with others he set up  Clean Water and Sewage systems, thus saving the lives of many people in the area.

Thomas Marsden, Peter’s grandfather, moved to the south and the family lost links with the area.   Thomas was a builder and one of the streets that he was responsible for Marsden Street was on the site of the road that now enters Pendle Community hospital. It is due to Peter’s foresight that the stone street name is now preserved in Pendle Heritage Museum.

Originally the Marsden family came from Paythorne where generations of the family farmed. Like other villages in the Yorkshire Dales as the population of Paythorne fell that of Nelson and surrounding areas rose.   There seems to have been shenanigans of some sort and perhaps not all the family were born on the right side of the blanket.   There are possible distant links to Wennington Hall and thence to Hornby Castle. The polar opposite to this is the poignant example of Margaret Dancer in Gisburn who was exempt from the Hearth Tax due to poverty. 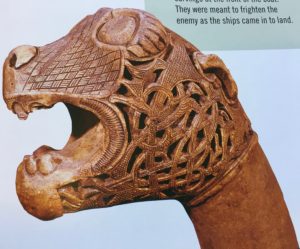 On to to the Norse Vikings who were ejected from Dublin in the 10th Century and travelled across to Preston and thus through the Pennines to York.   Peter’s ancestors must have settled around the Paythorne area and before travelling to the Nelson area.

Did you know? – that you can prove that you are descended from the norse Vikings by a simple DNA test, on the Y chromosone? The relevant chromosones show at 35% in Scandanavia, 14% on the Wirral, 17% in West Lancashire but 5% in the general population. The norsemen also left evidence of their existence via place names, Carr and Holme being two examples.   Which begs the question of the origins of Carr Hall near Barrowford.

As Peter stated ‘We are all walking history books”, we all contain the DNA that reveals where our ancestors once lived.   This talk certainly aroused our curiosity and caught our attention, one lady even travelled from Derbyshire!   Peter is a life time member of the Friends and we are grateful to him for donating his fee to the group.

And did you know? there is an advertising poster in Dublin aimed at the Scandinavian tourist industry  stating “This time they’re invited”!

It seems safe to concur that Peter would agree with the following. ”