Alex Whitlock, leader of our  archaeology group and expert on lithics (stone tools) gave an informative and entertaining talk as he brought us up to date on the work the group have been undertaking on Pendle Hill.  Evidence of habitation by mesolithic people (10,000 to 5000BC) to the modern day have been found represented by hand worked chert (flint is a type of chert) to broken, mass produced pottery. 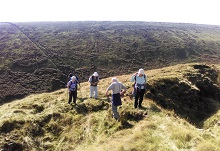 The starting point is often to walk the area (field walking), asking questions e.g. why is that bit of land flat (a platform) when the surrounding area is sloping?  Is there evidence of a building on the site?  What is that long indentation on the moor?  Is it a trackway, is it a boundary ditch?  Is it a disused watercourse?

These questions can sometimes be answered by reference to old maps but sometimes an archaeological dig is necessary.  The problem is that it often raises more questions than answers!

A case in point was high up on Pendle where there was evidence of burning.  Despite opening a couple of pits and confirming that there almost certainly had been a kiln, there was little evidence to show what it was for. 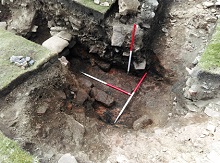 Vitrified rock (rock that has been melted by intense heat to produce a glass like substance) was also found.  Was it used for smelting metal ore of some kind or even producing bricks from the local clay.  We may never know but samples of charcoal have now been analysed to ascertain which are most likely to give a good radio carbon date so whilst we may not know what was being done, we should soon know when it was in use.