Desperately Seeking Joseph, The search for the English Tiffany

According to Louis C. Tiffany, “Colour is to the eye what music is to the ear” and it is the luscious rich glowing colours that the world remembers when thinking of Tiffany Glass.   However, not many people are  aware of the fascinating and extraordinary story of Joseph Briggs a Lancashire Lad from Accrington made good. Not many seventeen year old boys would have been so entreprenurial  as to have worked at puppeteering, set up a goat jumping in a hoop and a local delivery service in addition to getting the public to part with their money by providing them with electric shocks!  Joseph used this money for a one way ticket to America. Although many people were making their way to the lure of an exciting life and future in North America, there can’t have been many seventeen year olds doing this alone with the same determination and gusto.       This was an excellent talk, Douglas Jackson unpicked and delivered this story keeping the audience enthralled with his recounting of Joseph’s life and his contribution to the art work produced in the Tiffany workshop.

Without a chance meeting with the Louis Tiffany outside his headquarters it is unlikely that the Haworth Art Gallery would now have the largest and most covetous collection of Tiffany Glass in Europe. Joseph eventually became Louis’s right hand man and an artist in his own right and a major contributor to the body of Tiffany work.    There are links to Buffalo Bill, cowboys and Wild West shows, not to mention Alice in Wonderland, Bonnie Prince Charlie, silent movie stars and menage a trois.  There are interesting details and images of Joseph’s family, wife and children, Douglas was lucky enough to be able to talk to his son, also Joseph Briggs, who  enlightened him as to the missing details of Joseph’s life. 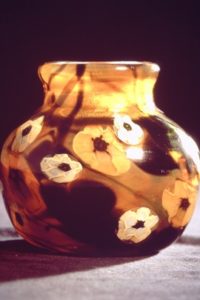 Along the way we were treated to fascinating descriptions of all the different types of glass  and glass ware, stained glass windows, vases and of course the famous Tiffany lamps all gorgeously illustrated.  Sadly there are no details as to the complicated techniques used in the manufacture of the glass, witness the goldfish vase, as records were destroyed.  It is unfortunate that some of the techniques have been unable to be reproduced today.

It is reassuring to know that Joseph and his family were able to profit from the fruits of his labour, owning a solid family mansion in  Wood-Ridge, New Jersey and a ‘cottage’ at Bud Lake, along with the newest fashions in automobiles.  Joseph lived at a momentous time in America’s history and  from his home he would have been able to see the rising skyline of Manhattan Island that we are familiar with today. Tiffany glassware was bought aplenty by millionaires in the Art Nouveau period, however, sales slowed due to a variety of factors, the  Great Depression with its associated bankruptcies and the rise of Art Deco, Cubism and Modern Art being the major causes. Eventually this led to a gradual decline and contracting of the business and after the death of Tiffany in 1933, Joseph took over as President.  Fortunately he had the prescience to ship some of the finest examples back to his home town at the same time he was declaring his company bankrupt. Heartbreaking for Joseph and shocking to us now, some of the stock ended up in the East River and the rubbish tips of New York. 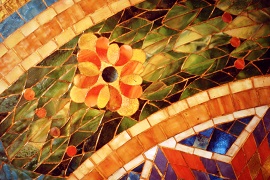 The Haworth Art Gallery is well worth a visit, they hold many important and irreplaceable items, worth fortunes in modern day terms.  There are only three of the stunning but subtle Aquarium vase with goldfish in the world and they hold one at Accrington, reputedly worth half a million dollars. Like all covetable antiques, the sums paid today for Tiffany ware are astounding.

And did you know?

That the foundations of the Empire State Building were made of  Accrington Brick? It would have been satisfying to know if Joseph was aware of this and known to be proud of his Lancashire heritage.

The story of how Douglas uncovered and came across all this information is in itself fascinating.  You are able to read all about Joseph and his story and association with Tiffany in Douglas’s book, Mosaic, for sale in the Pendle Heritage Shop. At £14 99 & £19 99p hardback, fascinating information and gorgeous illustrations.