With the threat of rain, four intrepid archaeologists made one last visit to the site.

The trench was cleaned before photographing. As a result of the previous night’s rain, the differences within the trench were more visible.

There is an area of stone and quartz in the trench, which could be interpreted as a collapsed bank and the circular feature in the geophysical survey. The area with fewer stones could be interpreted as the interior of the circular feature. The feature is possibly dated by yesterday’s finds to prehistory. The group will need to conduct a larger scale excavation in the future to ascertain the exact nature of the feature. It is possible that we have found a prehistoric barrow.

More potential examples of worked quartz, flint and chert were found both while cleaning the trench and in the spoil while backfilling. The amount of quartz within the trench would seem to be significant. The amount of half pebbles seems to suggest human activity.

This afternoon on site was windy and cold but sunny. Just the right conditions for lots of enthusiastic trowelling!  After removing around half a tonne of soil, the layout of the trench is become clearer.  Work will continue tomorrow to try to define the stone feature. We will also explore the south western section of the trench.

Apart from the south western corner to the trench, there was an abundance of quartz of many sizes, and quartz within limestone. Further excavation should help us to decide whether this is significant.

The afternoon of digging was accompanied by high winds and sunshine. Trench 8 was extended to make 3mx3m. The new section was trowelled to the same context of the rest of the trench.

It is estimated that the trench contained 20% quartz. The quartz was of a variety of sizes, many split in half. There was also quartz in limestone. Most of the quartz was contained within the stone feature.

The differences in the trench continued to be visible (see below).

Calf Hill, and especially the area of the 10m diameter geophys anomaly, has been surveyed by metal detector (thanks to Mike and John). There are no metal artefacts to explain or date the anomaly.

The area of the trench which could be interpreted as being within the circle had begun to produce potential evidence of worked chert, flint and quartz. The interpretation of the finds is tentative and will require an expert’s opinion, which will be sought in due course.

We left the site protected by the guards and intend to return tomorrow to have a last look and backfill.

On a dry and sunny day, with spectacular views of the areas around, Trench 8 (2m x 3m) was opened to continue investigating an anomaly identified on a geophysical survey in 2018.

The turf and top soil were removed by heavy trowelling. Few finds came out of this context. This is a good indication that any archaeology below this context has been untouched by later activity. At the end of day, there were hints of a stone feature in the middle of the trench. This will need further investigation.

On another dry and sunny day, work continued on Trench 8 led by Mike.   Once the trench was cleaned back and 3D photographed, it was then extended by a metre on the western side. The stone feature was found to continue in this area with a possible curve. It is also possible that the line of stones runs diagonally through the trench east-west. Analysis of the 3D photographs will give more information on this.

The archaeology seems to support the geophysical information. There is a feature in this area which does not seem to be natural.  As a result of the information gained, the dig has been extended for 3 afternoons. This will enable us to further examine the evidence in the ground and compare this evidence with the geophys results. Plans for future excavation can then be made.   There were lots of fragments of smashed chert in the trench, with one with possible attempted flake removals.

As the mist lifted, Calf Hill continued to cling on to its secrets for the last day of the current dig.

The dark soil was removed from the south of the trench. It seemed to run underneath Context 2, on top of the cobbled surface.The stone features were cleaned, photographed and lifted. The feature in the north of the trench seems to be a field drain.

The trench was then mattocked and trowelled. This revealed that a surface compacted with clay was lying on top of a mixed layer of rubble and soil. This was in turn lying on top of the cobbled surface.

The second day of the dig took place on a hot summer’s day. Although this resulted in the day being shortened, a lot of work was completed in the southern part of the trench.

The decision was made to extend the trench to reveal more of the stone feature. Typically, the spoil heap was in this direction.

The extension revealed a stone surface with some Nori (Accrington) brick within. Further investigation discovered that the stone surface had been laid on top of the cobbled surface – a layer of bricks, then flat stones, then an area of more haphazard stone. Suggestions for this area included a track for the construction of the reservoir or army use, or an area of hard standing used for an unknown purpose. It was not possible during the current dig to find out whether the surface was in a discrete area or if it extended as a track way. The presence of Nori bricks as a base of the feature and within the feature date it to no earlier than 1887 (dates of start of brick production). The cobbled road beneath this therefore probably dates to before 1887. Production of Nori bricks ceased in 2008, but it is unlikely that the surface is of this date.

Banner Image: 2 roads (from the north).   All images attributed to Catherine Rousseau Jones

On an uncharacteristically fine and sunny day, the group returned to Calf Hill to continue investigating the track/road. Specific questions being asked were ‘How wide is the road’ and ‘What date is the road?’. Trench 6 (see Calf Hill Season 2 Part 1 Day 3 29/5/19) was located and an extension trench 2mx4m was opened.

The turf was removed and Context 1 trowelled. This revealed an area of drainage pipe pieces compacted in an area of stone in the north eastern corner of the trench. The southern part of the trench revealed a stone feature. A darker area of soil possibly indicating a cut was also discovered.

The sunshine finally made an appearance on the last day of the current dig. The group worked hard to solve the riddle of the trench.

A sondage was cut in the centre of the trench (Context 4). This allowed the depth of the deposits to be seen. Darker areas were thought to be the result of animal or plant activity. The orange of Context 4 is thought to be the natural. This knowledge will be important for future investigations.

It was decided to close the trench down. The area does not seem to relate to occupation. There were few finds in Context 3 and 4. Further investigation is required in this area.

There were very few finds on Day 3. There were some pieces of chert, one of which may have been worked. A small fragment of slate was found, which has not been found in other areas of the site. 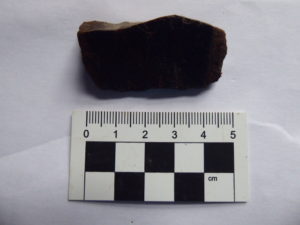 Mist and drizzle welcomed us to Calf Hill for the second day of digging. Work was continued in Trench 7, working through Context 1 and Context 2.

The grass roots were removed from the centre and east of the trench by light mattocking. Following this the trench was trowelled until Context 2 began to be seen. Mattocking was again used in the east of the trench to remove loose stones. The nature of the trench seems to have different areas. The western side has dark soil and compacted stones. The centre shows more orange soil with few stones. The east still has some large stones and an area of burning.

Clouds, showers and increasingly heavy rain accompanied the start of our summer dig on Calf Hill. Trench 7 (2m x 6m) was opened to investigate an anomaly identified on a geophysical survey in 2018.

Work was halted before 2pm due to increasingly heavy rain.

Context 1 provided a range of dateable finds which have been absent in other areas of the site. From the finds, this level can be loosely dated to after 1800 and before 1971. Further investigation into the finds is required.

These two coins give name to the Tupenny Dig of July 2019.